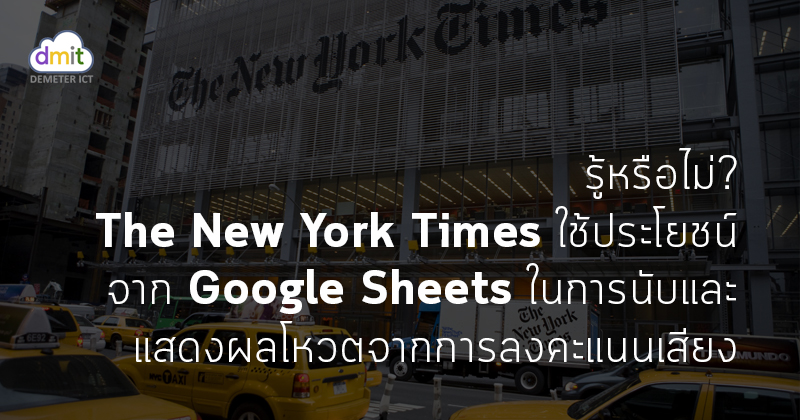 There’s a common phrase among reporters: “The news never sleeps.” This is why many news outlets rely on cloud-based productivity tools like Google Docs and Sheets to share information, check facts and collaborate in real time. And The New York Times is no exception.

In May 2017, the U.S. House of Representatives voted on a new health care law affecting millions of Americans. To report the news as fast as possible, The Times’ editorial team used Sheets to tally and display House votes in real time on NYTimes.com.

Engaging voters with the Sheets API

“People want to feel connected to the decisions their legislators make as soon as they make them,” said Tom Giratikanon,  a graphics editor at The Times. But rules in the House chamber make reporting on how every representative votes in real time difficult. Photography is restricted on the assembly floor, and there is a delay until all votes are displayed on the House website—a process that can sometimes take up to an hour.

To get around this lag, Giratikanon’s team used the Google Sheets API. The editorial team dispatched reporters to the chamber where they entered votes into a Google Sheet as they were shown on the vote boards. The sheet then auto-populated NYTimes.com using the Sheets API integration.

“It’s easy to feel like decisions are veiled in the political process. Technology is a powerful way to bridge that gap. Sharing news immediately empowers our readers.”

To prep, Giratikanon tested the Sheets integration ahead of the House vote. He created a sheet listing the names of legislators in advance, so his team could avoid typos when entering data on the day of the vote. Next, he set up the Sheet to include qualifiers. A simple “Y” or “N” indicated “yes” and “no” votes.

After a few practice rounds, Giratikanon’s team realized they could add even more qualifiers to better inform readers–like flagging outlier votes and reporting on votes by party (i.e., Democrats vs. Republicans). The editorial team researched how each of the 431 legislators were expected to vote in advance. They created a rule in Sheets to automatically highlight surprises. If a legislator went against the grain, the sheet highlighted the cell in yellow and the editorial team fact-checked the original vote to reflect this in the article. Giratikanon also set up a rule to note votes by party.

As a result, The Times, which has roughly 2 million digital-only subscribers, beat the House website, reporting the new healthcare bill results and informing readers who were eager to follow how their legislator voted.